Decades ago, on the last Wednesday of every month, the Mumbai police commissioner would take a group of senior officers — all Parsis — to Apollo Florist, opposite Colaba police station.

Fuelled by freshly baked bruns, khari and tea, the gossip session would go on for hours. This monthly meeting was labelled the ‘Parsi Punchayat’, a reflection of the number of officers from the Parsi-Irani (Zoroastrian) community in those days.

The tradition continued till the early 1980s, before it was abruptly discontinued. The reason — there were very few Parsi officers left in the Mumbai police.

During the 1980s, no one from the community joined the force. The beginning of the next decade (1990s) kindled some hope when the Irani brothers — Keyomerz and Cyrus — gave up their banking/Mantralaya jobs to carry the baton for the community. That was it. For the past 21 years, not a single Parsi has joined the Mumbai police. 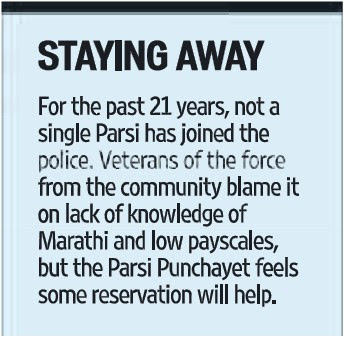 Three commissioners of the Mumbai police have been Parsis

Parsis, who once populated the force and rose to high ranks, are now hard to come by among the city’s khakhi-clad 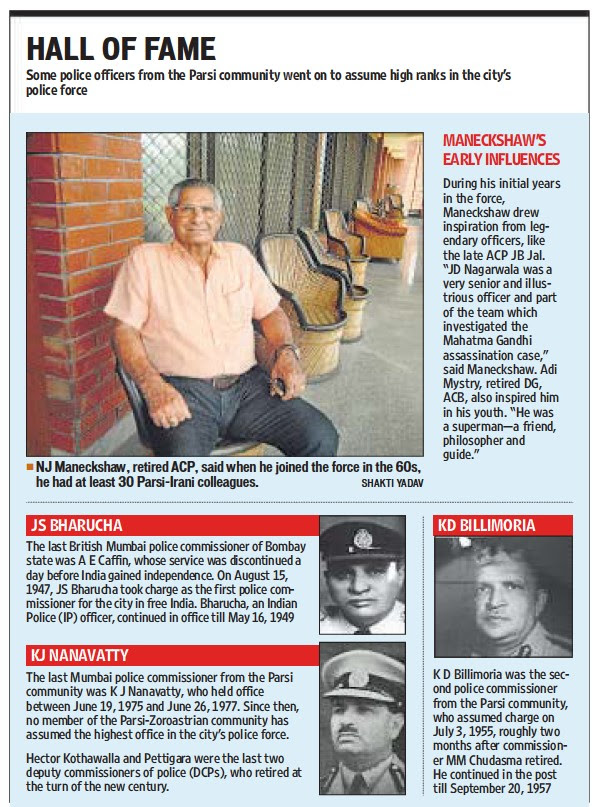 He sprints up the stairs into t he g ymkhana compound, and stops to feed stray dogs in the verandah. This is a daily ritual for NJ Maneckshaw, (retd) assistant commissioner of police (ACP),  who has been the joint secretary of the gymkhana since his retirement over a decade ago. Age has failed to take the steely glint from the eyes of the policeman who proudly carries the legacy of gentleman-officers, which his community has offered the state’s police force from even before the country achieved independence.

But the dwindling numbers of the community has cast a long shadow on its representation in the force, over the past five decades. Of the 70,000-member community, 40,000-50,000 of whom are in Mumbai now, just two remain in the 2-lakh strong Maharashtra police.This is an alarming ratio, considering that until a few decades ago, the weekly crime meeting conducted by the city police commissioner with officers at Apollo Florist in South Mumbai was referred to as a ‘Parsi Punchayet’ meeting, because of the concentration of attendees from the community. For a little more than the past two decades, no one from the Parsi-Irani community has joined the force. The last to join were Irani brothers Cyrus and Kayomerz from Godrej Baug in the early 1990s, who stepped into the shoes of their uncle, retired ACP Homi Irani.

“When I joined the force in 1962, there were at least 30 Parsi-Irani officers in the Bombay police” Maneckshaw said. “While many were of ACP level, a majority of them were inspectors, a top post in those days. They were inducted into the force in the late 1930s and early 1940s.” “Without any exaggeration, I’d say almost all officers from our community were of impeccable integrity and professionally outstanding. I am happy and proud that I was part of the force,” he said.

Maneckshaw remembers a steady participation of the community, though smaller in number,  through the 1960s and 70s – Russi Chowsky, Homi Irani, Feroze Ganjia, Naval Driver – all of  whom had retired as ACPs by 2010. “The involvement in the force took a major hit in the 1980s,  and after the Irani brothers, it stopped,” said Maneckshaw.

“It is quite likely that the new generation does not want to work hard and face the tough physical tests involved in the MPSC exams. Those who study well are bagging lucrative private sector jobs. Those who don’t, get into clerical jobs in banks and private companies,” he said. “However, the biggest impediment is their ignorance of the Marathi language, which is the medium for the exams. Those from our community who made it into the force in the last 20-30 years are either from districts, or were made to learn the language.”

Homi Irani, who retired as ACP of the traffic branch, agrees with Maneckshaw. “Kids of the community are not interested in taking up strenuous jobs. The new generation has lost its  nerve, they are scared to join the force,” he said. “When I joined, every branch would have at  least three-four officers from ParsiIrani community.”

Maneckshaw and Irani agree that the government and the Parsi Punchayet should encourage youngsters to join the force. “The department should advertise more, like they are doing to encourage participation from other communities,” said Irani.

Meanwhile, Maneckshaw puts the onus on the Parsi Punchayat to spread Marathi education on a priority basis, at the Parsi colonies spread across the city

In his cuffed shirt and navy blue trousers, inspector Kayomerz Irani ,47, could be mistaken for a corporate executive. Hunched over his desktop in a cubicle on the third floor of the foreign national’s registration office of the Mumbai police in Dhobitalao, his easy mannerism and soft speech belies the traits of a tough-speaking officer.

Kayomerz Irani (left) and his brother Cyrus Irani joined the force in 1994. His younger brother Cyrus (44), an inspector, also registers foreigners visiting the city by the seaport, at the Yellowgate police station. The Irani brothers are the last crop of Parsi-Irani representatives to the police force, having been recruited more than 20 years ago. The main reason for such a poor representation is that many Parsis lack knowledge of the  Marathi language. “We were fortunate that way,” says Kayomerz, who grew up with his brother in Parel, a Marathi bastion.

“As young boys, we were inspired by our uncle, former ACP Homi Irani’s uniform,” said Cyrus. They succeeded in cracking Maharashtra Public Service Commission (MPSC) exam and joined the force in 1994. Just two months into training, the brothers were sent to Latur on a rescue operation following  the earthquake, and then to Marathwada. “We hardly got any training at the academy, though  field deployment helped us grasp grass-root policing better” said Kayomerz. The brothers were called to Mumbai and given postings at the newly set up J J Marg police station following the 1992-93 serial blasts. “We were the natural choice since we belonged to a different community. ” Kayomerz went on to nab the dreaded underworld hireling Ejaz Lakhdawala (now a fugitive) for which the force rewarded him.

“In the last 8-10 years, working standards have deteriorated in the force with no leave, workload and high stress levels,” said Kayomerz. Both agree that reservation for the community will be incentive. “We are micro minorities. At least one post should be reserved for us” demands Kayomerz. “The spirit of adventure and entrepreneurship that the Parsi-Zoroastrian community was once known for seems to have been subdued, of late,” said Dinshaw Mehta, chairman of the Bombay Parsi Punchayet, in an interview with HT. He spoke of the reluctance of the new generation to take up tough assignments like joining the police force, adding that the ignorance of the Marathi language is also an obstacle. Excerpts…
What reasons would you attribute to the community’s non-participation in the police force over the last two decades?
I think the Marathi [language], or the fact that the young generation doesn’t know it, is the single-most important reason that is coming in the way of them appearing for the MPSC examinations. I personally think that we, as a community, are losing the spirit of adventure and entrepreneurship, for which we were once known. The young generation prefers white-collar jobs. Nobody wants to toil in the heat and dust. Why just the police service? Even in the defence services, the community’s participation has stopped long ago.
What can be done to encourage participation in police services?
The Punchayet has started coaching classes for students from the community who want to appear for engineering entrances. We are also planning coaching classes for UPSC examinations. We will certainly fund anyone who wishes to learn Marathi. It is a matter of concern that our representation in the police force has become almost nil. The Punchayet will soon launch some awareness programmes to encourage participation in the force.
What do you expect from the government, to achieve this?
I am sure the BJP government at the Centre has a soft corner for our community. Though we are a micro-minority group, there has been no reservation for us in government services. We would bring this to the notice of the government – both state and Centre – and ask for at least two seats reserved for us in the state police service, and some in the all India police services. Please don’t term it a quota: we are a proud community and have always been believers of meritocracy and competition. This is only one of the many ways to ensure community participation in uniformed services. We are hopeful that the government will respond positively.
What difference will it make if some Parsis join the force?
We would certainly like to have some friendly faces in the (police) department.
6 Oct 2014
Hindustan Times (Bombay)
Debasish Panigrahi debasish.panigrahi@hindustantimes.com
HT 6 th Oct 2014 – Pg 1
HT 6 th Oct 2014 – Pg 5