Tossing those pills away?

The orthopedic specialist has grimly pronounced that you must lie flat in bed for three weeks, not bend down or lift weights for the rest of your life. The disc has truly slipped. As you lie forlorn, staring at your false ceiling, ruing the postures you can no longer adopt, a Good Samaritan promises a magical, instantaneous cure. Groaning in pain, you stand before a large, mustachioed Parsi gingerly eyeing you. In the style of security guards at the airport, he frisks your fragile spine with his farmhand fingers and locates the source of your woes while his two helpers hold you back to keep you from running away should you have a last minute change of mind. The healer taps your back lightly with his foot twice or thrice before nonchalantly delivering a hard kick on the offending vertebra with laser precision. Momentarily, you are unable even to cry and then the man commands you to get up. Hesitatingly, you do and discover that your pain and stiffness have disappeared, instantly. You walk away smiling. The healer charges no money and you go home happily, thinking of the alternative employment the orthopedic doctor will soon have to find.

The legendary founder of this kick school was Manchersha Madhivala, a rough diamond. He cured thousands and never took a penny. Visitors to his simple home in Madhi village, a few miles from Navsari, were not allowed to leave without partaking of a spartan meal of coarse rice, dal and dried Bombay duck. It was believed that he had been given this magic touch by a sadhu (Indian ascetic). Madhivala imparted his method to Jal Amaria, Keki Kotwal of OK Wafers and Eruch Avari of Colaba, all of whom served selflessly and all now deceased. Kayomarz Patel continues the tradition. There were no horror stories of a kick landing wrongly or puncturing a kidney or lung. 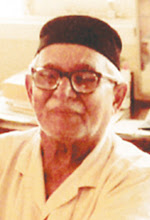 Parsis suffering from back and neck problems also visit a Gujarati businessman at his modest residence in one of Bombay’s western suburbs. He does not kick but manipulates vigorously. In the Jain tradition, his sadhana (discipline undertaken in pursuit of a goal) has resulted in a siddhi (a power) from Mataji, a female deity, enabling him to deal with the muscular skeletal system for the last 35 years.
Allopathy provides relief but no cure for common hepatitis or jaundice. This columnist, when 12, suffered a bad attack of jaundice and the doctor was concerned with the rising bilirubin level. An old chasniwalla (fire temple worker) was approached, bargained hard for his fees, concluded the arrangement, took a bowl of water, mumbled a prayer, blew on the water and dipped the patient’s finger in the water which slowly turned yellow. Later that evening, the blood test showed normal bilirubin and the coffee colored urine turned pale yellow. The utter revulsion for food or even its aroma was soon replaced by a gargantuan appetite. The doctor just shrugged his shoulders.
A century ago, in the state of Baroda ruled by Sayajirao Gaekwad III, a granduncle working as an engineer during day would cure scorpion bites after nightfall. The villagers would bring the writhing victim, suffering from excruciating abdominal cramps, to him in a cart. The Parsi would say a short prayer and the victim would gratefully get up and walk away, blessing the healer. Nothing was taken in cash or kind. Having been taught some spell by a roaming dervish, the Parsi had to stand in chest deep water in the river at midnight on one particular day in the year, virtually like a refresher course in toxicology! The Parsi did not pass on his powers to anyone.
Migraine cured by eating a piece of sweetmeat at dawn; sunstroke cured by passing a stainless steel thali (plate) filled with water, stones and a few other things, all over the body; piles cured by consuming a cup of mild black tea blessed by a Khoja gentleman residing in a bungalow at Bandra — these are cures that have been witnessed by this columnist over the years.
For those trusting only in Zoroastrian prayers, the powerful Ardibesht Ameshaspanda Nirang followed by the equally potent nirang of the legendary king of yore, Shah-e-Faridoon, a great white magician and healer, destroyer of all evil, have been found to be miraculous not only in curing ailments but for exorcising evil and mental disorders. The healer holds the right thumb of the patient while sonorously uttering the intonation: “Fénaamé yazad ba farmaané yazad, banaménik Faridoon é daavgayé (Faridoon commands evil to be frozen).”
Not all Parsis take kindly to alternative healers. Decades ago, one Sunday evening, we remember seeing a resident medical officer of a community hospital throwing out a Parsi healer reciting prayers before a young lad afflicted with a brain tumor. The doctor bellowed in a stentorian voice across the lobby that he would summon “the Gamdevi” (police). Strangely, himself an expert on forensic science and toxicology he was reportedly often found sitting in his cabin trying to hypnotize a rooster trying its damnedest to escape the iron grip of the good doctor.

Editors’ note: Nothing contained in this article should be taken as an endorsement, by this columnist or this publication, of any of the alternative methods of cure.