The efforts of the Hong Kong based Jal and Pervin Shroff’s family to provide a long-term, economically viable solution for The B. D. Petit Parsee General Hospital (PGH) moved a step closer to reality. On February 28, Jal, Pervin, PGH president Homa Petit and his wife, vice president Aban and others wielded a pickaxe in a symbolic groundbreaking ceremony for the proposed Shroff Medical Centre (SMC) of the PGH.
Thanks to a munificent contribution of US $ 22.5 million (Rs 151crores) from the Shroffs, the single largest monetary donation ever made to the community, a seven-storey, 200-bed, state of the art, multidisciplinary, cosmopolitan hospital is to be built on the PGH grounds. The surplus generated from the new Centre would be utilized to cover the current deficit of the PGH where the majority of Parsi patients are given either free or subsidized treatment. 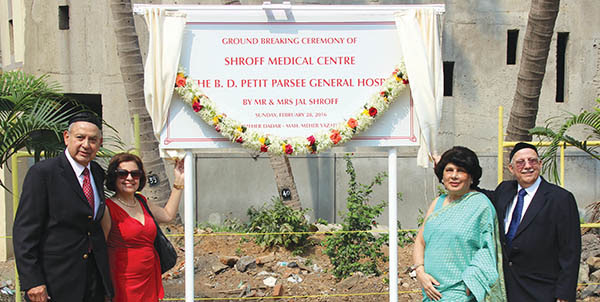 Jal and Pervin Shroff and Aban and Homa Petit 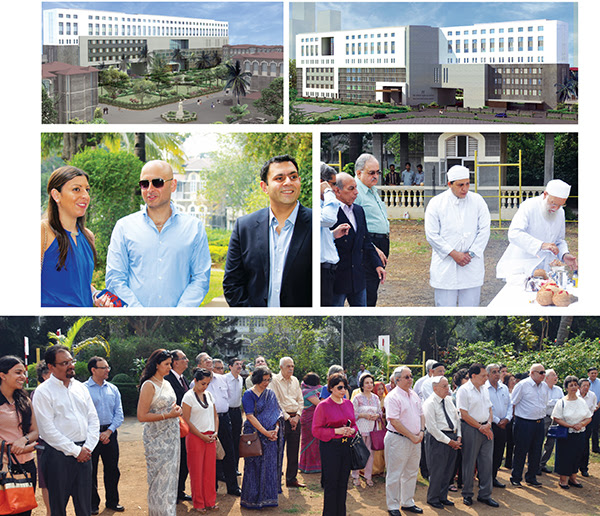 Prior to the groundbreaking, prayers were recited by Ervad Asphandiar Dadachanji before a gathering of the PGH committee members, a few doctors, the Bombay Parsi Punchayet (BPP) trustees, the Parsi Press and others.
Jal said the event “celebrates a visible beginning of a new milestone in the history of this noble institution.” Noting that 53% of the existing PGH beds are used for “absolutely free or highly subsidized patients,” he pointed out the “occupancy of paying patients is declining. The financial losses are not economically sustainable. Remedial action had to be resorted to without delay. A viable solution had to be found to ensure the Hospital’s future.” The PGH will continue to serve only Parsi patients, stressed Jal.
“We have no ulterior motive” in making the donation, he remarked, “nor are we in competition with any third party, nor do we want any undue recognition.” Of the total donation, $ 2.5 million  (Rs 16,74,01,798) have been earmarked for the oncology department. Cancer is an ever growing disease. In return for their philanthropy the Shroff family insist that a guaranteed income be paid to the PGH and the facilities of the new hospital be available to all Parsi patients on favorable terms. They expect a “fair and honest value for our money in terms of a professionally managed and efficiently run hospital,” adequate representation on the board and a voice in the running of the SMC. They also expect to be consulted on all major issues and appointments pertaining to the Centre. The SMC will be dedicated to the memory of the couple’s parents. A plaque to this effect will be prominently displayed and a “good sized, etched glass figure of Zoroaster will be displayed in the lobby of the Centre which I’m sure will give us the blessings we need and serve as a subtle reminder that it is Zoroastrian philanthropy that has provided a state of the art hospital for the benefit of the community of Bombay.” 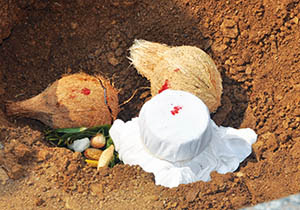 Ceremonial items that were buried
An agreement was signed on March 15, 2015 between the PGH and the Shroff family with the blessings of the BPP who are the owners of the property. The PGH has made available the unused FSI (floor space index). Well known conservation architect Brinda Somaya of Somaya and Kalappa has been appointed to design the new building and she says she has kept the ethos of the existing structures in mind.
Former president of the Zoroastrian Charity Funds of Hong Kong, Canton and Macao for 27 years, Jal was running the family business S. Framjee and Company with Pervin when a business opportunity led them to co-found Fossil in 1984. Starting with watches, today Fossil is an international design, marketing and distribution company with an extensive line of men’s and women’s watches, jewelry, handbags and leather goods, sunglasses and other fashion apparel (see “Fossil for the fashionista,” Parsiana, September 21, 2011). The company went public in 1993 and is quoted on NASDAQ (National Association of Securities Dealers Automated Quotations). The World Zarathushti Chamber of Commerce had conferred on Jal its honorary membership in January 2012.
Around three to four years ago the Shroffs spoke to the Hospital management about the growing annual deficits, Homa recalled. According to the balance sheet for the year 2014-15, the 220 bed PGH suffered an operating loss of  Rs 10.72 crores (US $ 1.60 million) of which Rs 6.98 crores (US $ 1.04 million) was made up from the investments income and Rs 2.45 crores (US $ 0.36 million) from donations, leaving a net loss of Rs 1.29 crores (US $ 0.20 million), almost double the previous year’s loss of Rs 61.48 lakhs (US $ 0.10 million). A total of 2,379 in-patients were treated during the year. The report notes “there has been a marginal increase in the number of free and subsidized patients and occupied bed days. However the number of paying patients and occupied bed days has significantly reduced during the year.”
According to Homa, the PGH financial fortunes started to decline on account of the community’s dwindling numbers, overseas migration, shift to the suburbs and smaller cities like Poona, difficulty in commuting, smaller nursing homes mushrooming in the suburbs and an inability to provide medical facilities such as CAT (computerized axial tomography), magnetic resonance imaging (MRI), catheterization laboratory (Cathlab) — (“to visualize the arteries of the heart and the chambers of the heart and treat any stenosis or abnormality found” — Wikipedia). 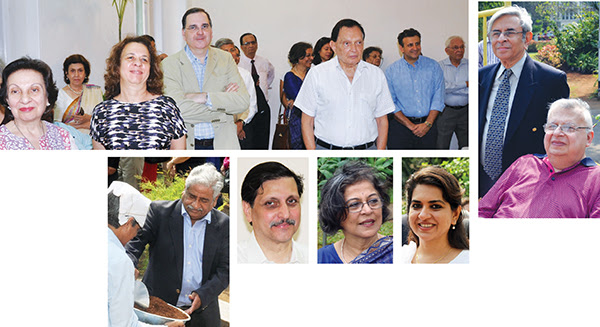 Clockwise from top: guests listening to the speeches. Homi Khusrokhan and Keki Dadiseth,
Shaina NC, Brinda Somaya, Yazdi Desai and Dinshaw Mehta
There was a suggestion to set up a cosmopolitan diagnostic center on the PGH grounds to generate income but the management came to the “conclusion that a mere diagnostic facility would not, according to the doctors, be sufficient but if the diagnostic center was part of a secular hospital, which would be run on commercial lines, then, there would be a good possibility of subsidizing the deficit,” said Homa.
The new hospital will ensure the benefits of modern, medical technological equipment “would flow for the benefit of the Parsi community including our poor and needy.” Homa hoped the new hospital will serve as “a signal to our honorary doctors to eventually bring back in-patients to the paying ward of the present Hospital, as with the new project, all the facilities would soon be available on campus for our Parsi patients.”
Homa stressed that the existing Hospital “will continue to be ONLY for Parsi patients and this ‘Parsipanu’ will not be affected.”
Once the SMC is ready the facility will have to compete with other private hospitals in Bombay to draw patients. But the Parsi brand equity should help to give them an edge, all other things being equal.
Parsiana, Cover Story, 21-Mar-2016