“I am quite clueless why Facebook imposed the ban on me. I never post anything vulgar. Yes, my posts, especially on current affairs and politics are very outspoken. But, staying in a democracy, I do believe I have my freedom of expression. Plus, what I post, I do on my own timeline. I am not spamming anyone else’s timeline,” remarked Secunderabad based Jehangir Bisney who had to face a 72-hour ban on Facebook from May 19, 2017 with a summary notice that read,  “You recently posted something that violates Facebook’s policies, so you’ve been temporarily blocked from using this feature.”
“I was not too concerned about my own Facebook timeline. I was more concerned about the Parsi Zoroastrian Anjuman of Secunderabad and Hyderabad’s (PZASH) Facebook page because since inception (March 21, 2013) there has never been a stretch where nothing was posted on it for 72 hours. There wasn’t anything I could do as I was the sole administrator!”
Narrating the sequence of events, 55-year-old Bisney recalls, “Generally during weekdays, I log in to Facebook around 4.15 a.m. to update my Anjuman page. On Friday, May 19 when I logged in, I got a couple of notices. They mentioned something about me not following Facebook policies, etc. I thought they were some routine notices and I did not bother to take screen shots. Then after logging in I realized there was something amiss because I could not ‘like,’ ‘comment’ or send messages to anyone. When I then tried to post on my Anjuman page, I could not do that. It was then that I realized it was something more serious than what I had thought initially.”

When he suddenly went off the social network his friends who were intimated about his profile being blocked, initially thought it was one of his pranks, but subsequently were concerned for his safety and immediately spread the word on his and their timelines. Bisney appreciates that “Parsiana too was a big pillar of support as they put this as headline news on their website, App and Facebook Page. I was touched but honestly, it wasn’t the sort of publicity I was looking forward to!”
After 72 hours when the ban was lifted, Bisney was able to resume his posts on current affairs, politics, cricket and other trivia. “They are mostly humorous with a huge dose of sarcasm and wit. Generally my posts are one liners or just a little more. I am not one for sentimental stuff and ‘Good morning’ posts on Facebook!” Fearing that people outside his ‘friends’ list may also be viewing his posts, Bisney plans to recheck his privacy setting. “I was given to understand that if a person or a group of persons complain to Facebook, they impose such a ban. I am not too sure about this. If that be the case, anyone could have complained from my ‘friends’ list or from another public closed group where I post too.
“But I have learnt a thing or two out of this. Firstly, it is never advisable to have just one administrator for a successful Facebook page. So I have a backup administrator now. Secondly, all your ‘friends’ need not necessarily be your ‘friends’ on Facebook. They could be ‘fiends’ who wait and watch to strike at the opportune moment.” He is now very selective about accepting friend requests on Facebook stating, “Once bitten, twice shy!”

Top: Jehangir Bisney; Above: cover photos from Bisney’s and Parsi
Zoroastrian Anjuman of Secunderabad and Hyderabad’s Facebook pages
Having started his independent chartered accountancy (CA) practice 30 years ago, it was two years prior, in 1985 that he stood for elections to the PZASH managing committee and won! “At 24 years I was the youngest in the then managing committee. Today, after 32 years, I am the second youngest! I am now a trustee. Thankfully, our Anjuman works with a great degree of cohesion and transparency. Having an accounting and legal background, my views are highly respected by the other committee members.
“Personally, I have been on Facebook for over a decade and I am aware of its reach. Therefore, in 2013, with the permission of my managing committee I started the PZASH Facebook page. Little did I then realize that within four years, our page would have over 11,500 likes! This is the largest number of likes for any Parsi/Zoroastrian anjuman Facebook page in the world! Without sounding boastful, I feel very proud because as a sole administrator of the page I have no resources at my disposal like reporters, photographers or a full-fledged office. Moreover, Hyderabad/Secunderabad hardly generates community news so I have to … get news from elsewhere. If one likes the PZASH Facebook page, they can be rest assured of all the community news and much, much more! I avoid controversial issues to be debated on this page though I post all community matters which are in the public domain on the internet. I love to promote (items on) Zoroastrianism in Iran, Parsi cuisine, attire like garas, daglis, places like Udvada, Navsari and others.”
Founder president of the Twin Cities’ Zoroastrian Youth League (Secunderabad and Hyderabad), Bisney says, “For many years it was the most active and vibrant Youth League in the country. We had the All India Zoroastrian Youth Festival in 1990 in the twin cities which was very successful. After our major event, Kaleidoscope ’98, I stepped down due to other commitments. Sadly, the Youth League then just faded away. In 1990, the Federation of Zoroastrian Youth Associations (FOZYA) was formed and I was elected the founder president.”
Born in Bombay, Bisney studied at Greenlawns High School, completed his BCom from Lala Lajpatrai College and H. R. College, LLB from K. C. Law College and was an all-India rank holder in his CA final examinations. His father Rustom who handled exports in the erstwhile Tata Oil Mills Company Limited (TOMCO) was very widely travelled, a keen sportsman, avid photographer, numismatic and philatelist. Mother Khorshed was a homemaker. On his father’s retirement, the family, that included elder sister Feeruza, relocated to Secunderabad. Feeruza now lives with her family in the US.
Jehangir resides with his wife Hoofrish whom he describes as a “very creative artist,” who paints on jute bags and T-shirts, and does paintings on canvas. Daughter Arnaz, 24, is studying until she finalizes her career choice and son Shayan, 20 is pursuing a five-year integrated law course. “Both my children seem to have an inclination to enter politics and already appear to be heading towards activism,” notes Jehangir. 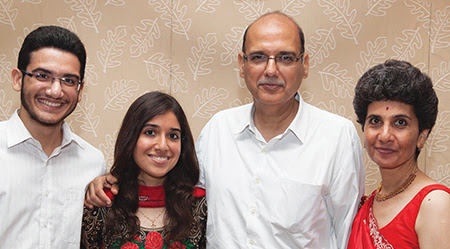 Besides his personal, family, work and community commitments, Jehangir sets aside time for his daily morning walks and early evening swim at the Secunderabad Club. Any time left over, he spends reading or on the internet. “Crazy about cricket” in his youth, during Test matches he used to carry his pocket transistor with him, he remembers.
Referring to his cosmopolitan upbringing since he did not reside in a baug and did not have any Parsi students in his class, Jehangir states, “My father had very liberal views. My mother was from an athornan background and was more orthodox.” Whilst they visited the fire temple on auspicious days Jehangir was most fond of attending the 18-day muktads at the residence of his mother’s masi (maternal aunt) opposite the H. B. Wadia Atash Behram on Princess Street. He remembers the delicacies she made — bhakras, malido, papri, popatjees, varadhwaras, saandhraas and karkaryaas! “Today’s generation would not have heard, seen or eaten most of these Parsi delicacies!” he points out.
“I have been brought up in an environment where I have been taught to fight for everything that is right and stand by one’s convictions and principles. I guess that is the Zoroastrian way of life. With a legal background, I am careful of my words before I post anything on Facebook. But, sarcasm is not appreciated by all, especially by those whom I target. By the way, it is not just the present dispensation that I am critical of. Before this government, I used to mock the UPA government, especially Dr Manmohan Singh, Rahul Gandhi and others. Basically, I am always anti-establishment. It’s no fun showering praises, is it? The best cartoonists, right from R. K. Laxman to Satish Acharya, never praise the powers that be. As I said, I do not post anything defamatory. It is just a play of words. But, my countrymen have become so serious nowadays that it appears even laughing has become a sin! Even after the ban, I am posting my usual stuff. I presume private platforms like Facebook and Twitter can do what they want. After all, it’s their space!”
When most people are afraid to speak freely, Jehangir seems to have taken a courageous stand with the backing of his family. He says, “My daughter and son are my biggest supporters. My wife does not say much. My sister always wants me to be careful though at one time I used to think she was the bravest in my family!” When asked if he would be more circumspect from now on, Jehangir responded, “Old habits die hard! My posts since May 22 (the day the ban was lifted by Facebook) haven’t changed a bit.” His motto has always been “Bash on — regardless!”