The Tata Trusts project, which seeks to provide affordable cancer treatment in every nook and corner of the country, is being personally supervised by Ratan Tata.

Tata Trusts, led by Ratan Tata, has pledged Rs 1,000 crore and other resources to help the central government develop cancer-care facilities in five states, an initiative that promises to drastically improve access to treatment for thousands of patients.

The facilities in Rajasthan, Jharkhand, Uttar Pradesh and Andhra Pradesh will be created afresh or upgraded on the lines of Parel’s Tata Memorial Hospital, which attends to patients from across the country.

The hospital, the country’s top cancer-care centre, provides free or highly subsidised treatment in over 60 per cent of the cases. But the massive workload invariably leads to a long waitlist. Majority of the patients hail from struggling families which cannot afford to stay in an expensive city like Mumbai for a long time. Many quit the treatment midway. The new facilities will help tackle this problem.

According to an official in the central department of atomic energy, whose functioning is overseen directly by the Prime Minister’s Office, Ratan Tata recently shared his desire to open more affordable cancer treatment centres. He also urged Tata Group companies to chip in through their CSR programmes.

The Rs 1,000-crore aid pledged by Tata Trusts will come in the form of internal infrastructure and medical equipment. Their doctors and paramedical staff will be trained by Tata Memorial Hospital. 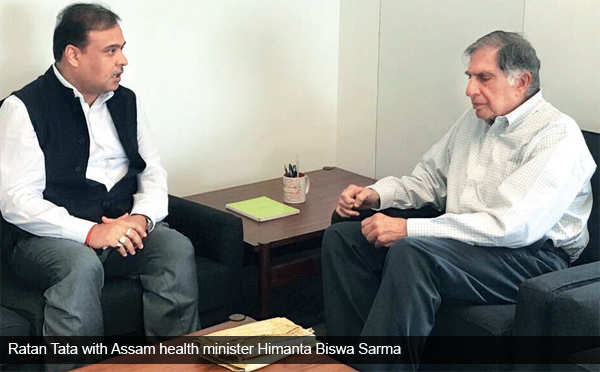 Tata Trusts has already signed an agreement with the Assam government for upgrading the main cancercare institute in Guwahati and adding capacity (advanced tertiary care facilities chemotherapy, radiation and surgical oncology) in hospitals in other districts. The Rs 540-crore project will be carried out in three phases.

“I am extremely delighted to have met the legendary Ratan Tata and members of the Tata Trusts for what may become a rare philanthropy government collaboration on cancer care and management,” Assam health minister Himanta Biswa Sarma tweeted on October 12. Sarma was in Mumbai at the time.

A new hospital will come up in Jaipur, Rajasthan, at the cost of Rs 200 crore. The state government there will bear most of the cost. In Ranchi, Jharkhand, Tata Trusts will be allotted 23.5 acres for a new centre. In Varanasi, Uttar Pradesh, the existing Indian Railways cancer institute and research centre will be upgraded. Tata Memorial took over the facility recently. In Tirumala, Andhra Pradesh, the Tirupati Balaji Temple Trust will provide 25 acres for a new facility.

“Once the new or upgraded centres start operations, patients from north India won’t have to come all the way to Mumbai for basic treatment,” said a senior doctor at Tata Memorial.

The Parel hospital, which has 700 beds, treats around 67,000 new cancer patients from across the country every year and also attends to 4.5 lakh follow-up cases annually. People from the Middle East and Africa also seek medical attention here.

At a meeting with central government officials last year, experts from Tata Memorial revealed that one third of the patients hailed from north India, and discussed the possibility of opening dedicated cancer centres there to speed up treatment.