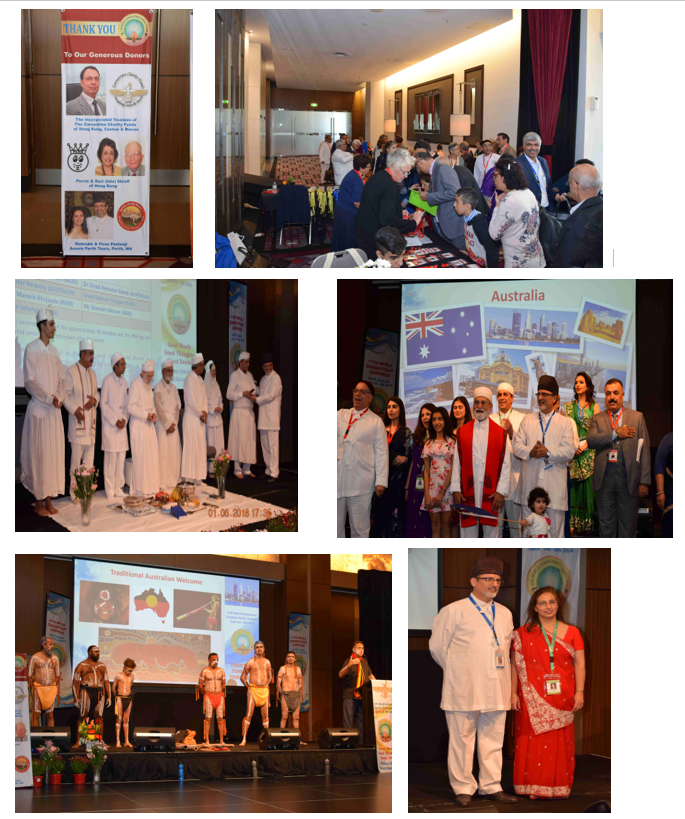 A very big Thank You to all the delegates and speakers who flew into Perth, Australia from over 14 different countries to join the 11th World Zoroastrian Congress (11WZC) in the Astral Rooms, Crown Complex, exactly one week ago today.

A special note of thanks to all our generous donors and sponsors especially from Hongkong, India & Dubai, as well as to the team of global supporters and to our very own Team Australia – we truly appreciated your assistance and support in making this a fantastic and memorable event! The theme of the Congress Together, towards tomorrow, was embodied throughout the 3 wonderful days.

The official 11WZC photographs and videos of the presentations will be made available to all our delegates and those that would like a copy shortly, at cost. Please stay tuned, for more information on how this can be purchased, which will be sent out separately in the next few weeks.

The day began with a meeting of the Global Working Group (GWG) in the morning where many positive outcomes were recorded for the future of our global community.

At exactly 2.20 pm as per plans, the doors of the Astral ballrooms were opened to the delegates who were all dressed up in their traditional dress of saris and daglis and were greeted with a blast of the popular Zoroastrian song – Chaiye Hame Zarthosti. As the delegates settled in their chairs after meeting old friends, the Religious Khushali nu Jashan commenced at 2.30 pm sharp. It was led by Ervad Saheb Aspandiyaar Dadachanji and completed with the help of the other Ervads from Iran, France, USA, and of course Sydney & Perth.

After the Jashan, the Master of Ceremonies Zarine Commissariat, AfreedMistry and Farzana Khambatta took over and the Ervads were felicitated by our Congress Chairman Mr Firoz Pestonji, for their contribution to the community. Aspandiyar jee also gave a short speech informing the people of the importance of the Jashan ceremony. The chasni and fruits along with the Sev, Ravo & Malido which was made by Perth volunteers was served to delegates on their tables and an interactive audience participative session with icebreakers commenced.

After this we had the Traditional Welcome to Country with a dance performance by the Wadubah Dance Group of Perth which enthralled the delegates and kept them spellbound. Once the traditional open was completed we had a select few delegates marching in country wise, into the Astral room where they planted their country’s flag into the flowerpots at the front of the stage and stood to attention while their countries’ national anthem was being played. This was the first time a concept like this has ever been carried out at a Zoroastrian World Congress – where all 14 countries represented were given acknowledgment to portray how we, Zoroastrians are spread out all over the world but are linked together by our wonderful religion and ancient culture. Australia as host country came in last to a loud round of applause & led forward by young people and the future generation especially the Chairpersons grandchildren.

The Congress Chairman then gave a small speech and officially opened the Congress. He informed delegates of the background of the Congress and gave a quick rundown of the next few days of activities. This was followed by a display of messages from prominent global leaders flashed on the screen for the delegates. Shri Amit Mishra – the Consul General of India in Perth then gave his welcome speech. He enumerated the important role of the Zoroastrian community in India and was sure that globally too, Zoroastrians were making their contributions and their mark.

Next, the Global Zoroastrian leaders welcomed the delegates to Perth. This was followed by the welcome address of the Premier of Western Australia, Honourable Mark McGowan MLA, who personally welcomed all delegates to enjoy the West Australian hospitality and also introduced the first Zoroastrian MLA – Mr Yaz Mubarakai to the people. The Premier also presented a token of appreciation to all of our major donors and supporters of the Congress as well as launching the 11WZC Legacy Book on Zarathushtra. A short film and book launch of Life & Times of Zarathushtra followed, compiled by Meher Bhesania of Dubai.

All the local Australian volunteers were thanked and introduced on stage and then the evening’s entertainment line-up followed. All of the entertainment was heart thumping and each piece was a colorful and riveting – each performance from the youngsters surpassed all expectations. The evening kept going on with DJ and music from Zee Band of Houston who had specially flown in from the USA to entertain the delegates during all three evenings of the Congress. To finish the night everyone enjoyed the sumptuous and plentiful buffet dinner and dessert by the Crown Complex which was delicious and thoroughly enjoyed by all present.

Day 2 began on schedule at 8.30 am with a Monajat performed by Mani Rao of USA. Followed by a short presentation on the film – Wings of Fire by Meherji Madan. After this, we had very captivating speeches and presentations by Yaz Mubarakai MLA from Jandakot, Dr Esfandiyar Ekhtiyari of Iran and Zoroastrian demographics from Roshan Rivetna of USA. For detailed information of programmes please refer to the website or souvenir book supplied.

After morning tea, the interesting topics and speakers continued and covered a vast range of topics from women empowerment – ‘Moving into the 21st Century’ led by Behroze Daruwala to Daraya Awat from Kurdistan to Berjis Desai and Khojeste Mistree who offered interesting viewpoints in their areas of expertise.  During the lunchtime break, we also had a magic show to dazzle our delegates while they enjoyed their meals.

After afternoon tea we had a young 18-year-old New Zealand entrepreneur and CEO Rishad Maneksha give us a presentation on how he and his team started a business converting scrap items into reusable items. A fascinating youth panel came next, led by Arzan Wadia – Vice President of FEZANA after which we had other dedicated youth leaders, speaking about futuristic foresight and offering future solutions to preserve Zoroastrianism by Radman Khorshidian (Iran) & Kobad Bhavnagri (Australia).

In the concurrent session room, delegates were able to listen to an interesting topic on the Gathas by Dr Meheravar Marzbani, followed by the World Zoroastrian Chamber of Commerce (WZCC) panel of entrepreneurs led by Rustom Engineer of USA. Dr Mehran Sepheri presented a very intriguing topic of discussion on 1000 Points of light which was followed by a special presentation by Rati Wadi on the eminent Parsis which kept people enthralled. Mobed Kourush Niknam elaborated on the different groups of Zoroastrians worldwide & the Prophets insights into the behavior of the Youth.

The day ended with dinner and dancing on board a splendid Swan River Cruise which was organized by Aussie Perth Tours our Zoroastrian Tour Operators with live music by The Zee Band and a dance performed by Zenia Sunavala of Houston as well as Louisa Wood and Damaris –Australian Salsa World Champions. The dance floor was packed most evening and with regret, the cruise ended.  Ferrita was the 4th MC.

Day 3 also began on time at 8.30 am with a Gatha rendition by RashinJahangiri of Iran & Monajat by Mani Rao followed by a short presentation of a film on Australian Zoroastrians presented by the Melbourne Zoroastrians. We had the privilege of listening to non-Zoroastrian speakers of Australia who have done tremendous work being involved with our religion and culture. DrAlison Betts spoke of archaeological digs she is involved within the middle eastern regions and David Adams talked of his experiences and discoveries showing us his wonderful historical films. This was followed by Mr Yazdi Tantra who presented us the various means and the vast resources we have available to digitally connect to each other around the world.

After the tea break, Darya Awat spoke of her experiences again (due to public request) and was followed by Dinshaw Tamboly informing delegates of his philanthropy work in Gujarat. Sam Bulsara then presented to us the advantages of using marketing and media to build up a strong global community. Behram Pastakia moderated a panel of global leaders who explained to our delegates what their respective organizations stand for and a quick run through of their activities. The organizations included the GWG, FEZANA, WZCC, FAZA (Federation of Australian and New Zealand Associations) and ZTFE (Zoroastrian Trust Funds of Europe ).

Lunch was followed by Mr Rohinton Rivetna of USA who has been a backbone and visionary within our community, explaining to our delegates how our community can take a leading role in various interfaith movements globally. Malcolm Deboo of ZTFE then presented to us the in dept research which has been completed on various British Zoroastrian defense personnel during World War 1 period along with personal anecdotes of these leaders. This was followed by a truly inspiring panel session by the noteworthy Zoroastrian entrepreneurs led by Sam Bulsara.

Mr Xerxes Dastur spoke of prevailing Indian conditions, tax implications andentrepreneurship. He left his hectic BPP elections campaigning to be in Perth, as promised, to attend Congress to promote participation and togetherness. His gesture is commendable. Dr Keki Tureil was the final speaker for the day and he presented detailed and a thought-provoking session, about the brain and its enigma.

In the concurrent session room, we had a thought-provoking panel of the youth led by Farrokh Mistree of Oklahoma, which was followed by a very successful speed networking session for the youth and targeted at getting young Zoroastrian entrepreneurs talking and mingling together by Jehan Kotwal. Fariborz Rahnamoon followed this by a very fascinating presenting on the Gathas.

After the day of motivating and captivating speakers finished at 5.30pm the 11WZC Gala Event started with Congress awards hosted by Meher Bhesania, followed by an exciting dance by an Australian entrepreneur and previous young Australian of the year, Louisa Wood.

The Congress Chair then presented his vote of thanks and also presented tokens of appreciation to all the volunteers in Team Australia. Before the dancing and the dinner started the World Zoroastrian Trophy was officially passed over to Mr Astad Clubwala and Mr Homi Gandhi of USA who will hold the next, 12th World Zoroastrian Congress in 2022 in New York. 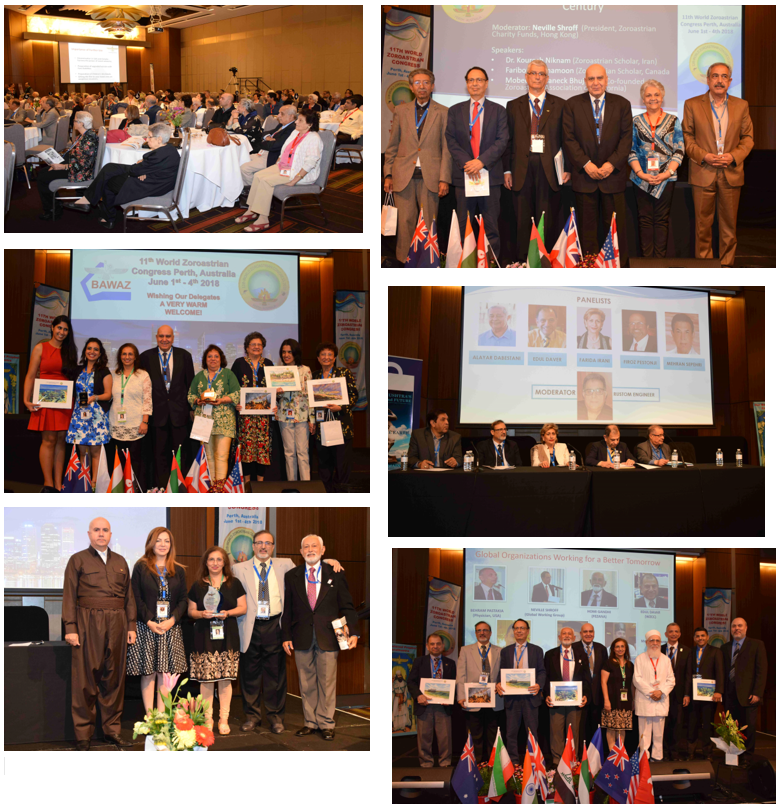 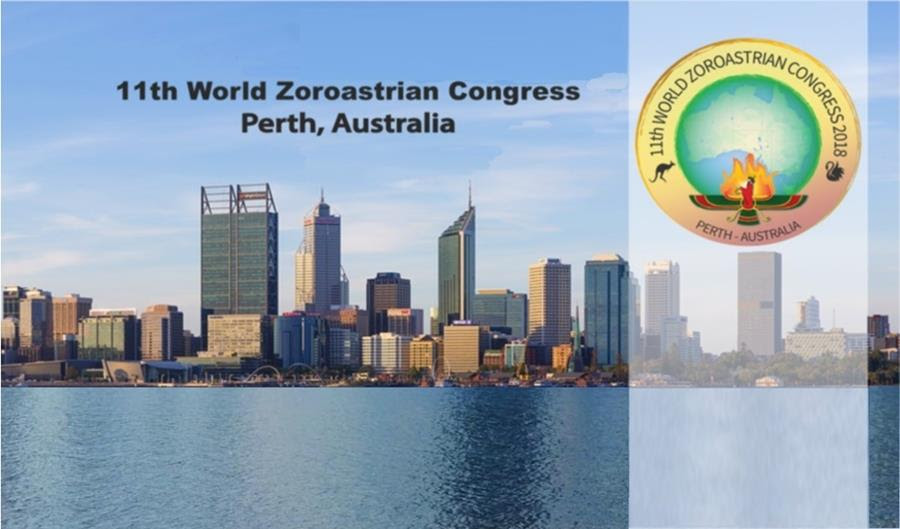