In his late 19th-century book A Chronicle of Cricket, writer Shapoorjee Sorabjee vividly described how the Parsis began playing cricket:

‘Some enthusiastic boys at first only gleefully watched from a distance the game played at Fort George, and then hunted after and returned the balls from the field to the players. For such gratis services rendered heartily and joyfully the officers sometimes called them to handle the bat, which was done with extreme pleasure and delight… thus were learnt the initiatory practical lessons in cricket by the Parsis.’ 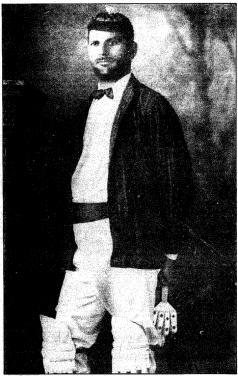 In the initial phase of his career, Pavri, barely out of his teens, concentrated exclusively on generating as much pace as possible. The story goes that during his tenure at the Baronet Cricket Club, some of his opponents who batted without boots, gloves and leg guards ‘went home with crushed toes and fingers.’

Pavri admitted that there was a lot more to be learnt when it came to sharpening his bowling skills, as he was merely hurling the ball at the stumps rather than paying attention to his length and movement. During the 1888 tour, he gained valuable tips from the Surrey pair of Bill Lockwood and John Sharpe, and coupled with his inborn talent, he used them to lethal effect as the tour unfolded.

His batting ability was lesser known, but he was good enough to open the innings on many occasions for the Parsis, including in their first match of the 1888 tour against the Gentlemen of Essex at Leyton. In this drawn affair, he scored three runs and took two wickets. It is to be noted that all matches on the tour were played against amateur teams and hence were not accorded first-class status.

Click Here for the full detailed story by Rustom Deboo