Posted on 12 July, 2015 by yazdi 2 comments
Navroze Godrej, the son of Godrej & Boyce Manufacturing (G&B) chairman Jamshyd Godrej, and who is the only member of the fourth generation of the Godrejs so far to be inducted on the company’s board, is bringing about a culture change at the 118-year-old organization.

A key element of this is a changed hiring policy to look beyond engineers. While a decade back G&B predominantly had engineers working for it, today 30% of its workforce (total strength is 11,500) hails from a non-engineering background.

The changes Navroze, 33, is bringing about come in tandem with a significant board-level change. Phiroze Lam, executive director and president of the company, is retiring after a 40-year long stint with G&B. Lam is known to have mentored the fourth generation of the Godrejs and is a close confidant of the family. Anil Verma, executive director (personnel & administration), will take over as the new president from October 1, 2015.

This has enabled the company to push younger talent into leadership roles. Harpreet Kaur, 42, will be the new head of HR in Verma’s place.

Over the last two years, Navroze has been having discussions at different levels on what the organization wants to accomplish in the next three-five years. He doesn’t rule out the Rs 9,800-crore odd G&B, which is part of the $4.5-billion Godrej Group, foraying into adjacent sectors in existing businesses. He hopes these changes would help G&B make products that can establish superiority in the market.

Of the 14 businesses of G&B, appliances and furniture are the major revenue earners. It has market leadership in Interio, material handling and security solutions. The group has a vision to grow 10 times in 10 years with a CAGR of 26%, which is also the current rate of growth.

But the culture at G&B – which makes locks, refrigerators, furniture, security equipment, forklift trucks and warehousing equipment – has been perceived to be archaic, with a silo-based working process seeped deep into its DNA. 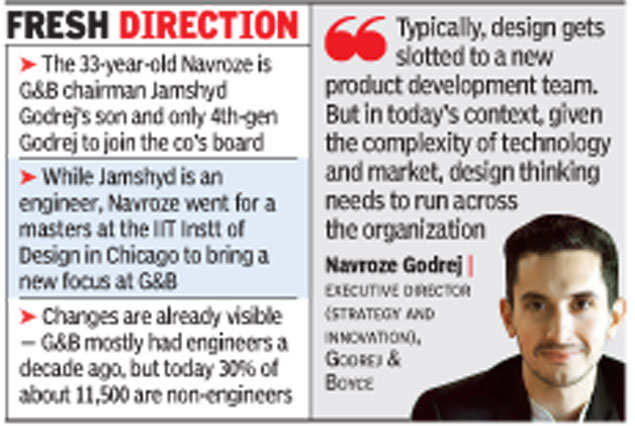 For two years since he returned to India after completing his masters from the IIT Institute of Design in Chicago, Navroze has been working towards bringing about a change in thinking at G&B and this is now quite visible at the organization’s headquarters at Vikhroli, an eastern suburb of Mumbai. The ‘Hubble’ and an innovation centre, where cross-functional teams work on projects, is a move in this direction.

Unlike his father, who is a mechanical engineer, Navroze decided to pursue design because he had conviction that by doing so, the company would gain immensely by adopting design thinking in everything it undertook. “It’s not just something that I want to do, it’s something that makes a lot of sense for the organization to do – to approach business from a design perspective. We need to understand how technology is changing and affecting people’s lives so that we can make products that fit people’s needs and live up to their expectations,” Navroze, executive director (strategy and innovation), G&B, told TOI in an exclusive interaction.

Navroze wants to weave design thinking in every function and department – down to the individual employee at G&B. “Typically, design gets slotted to a new product development team. But in ?today‘s context, given the complexity of technology and market, design thinking needs to run across the organization. The way you think about channels, brands, product design – it all needs to tie in together, into one holistic and seamless customer experience,” said Navroze.

So, in addition to engineering colleges, G&B now visits ?design schools as well to bring in fresh thinking. “If you look ?at the kind of people we have today – designers, engineers, business strategists, sociologists and researchers – all work together on the same team. When you have teams that work independently – engineers working with engineers, marketers working with marketers – it is a very silo-based thinking. That’s not the way our country is. Our customers are not like that. So we had to change,” said Navroze.

Navroze, who has a keen eye for western classical music and plays the piano, would know that individual notes can make good melody only when they add up in combinations.