“Passion keeps me focused but what really drives me is the obsession to succeed,” says Kynan Chenai, (pictured) who recently 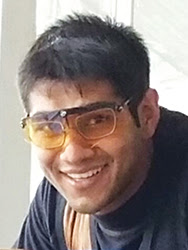 made the cut and secured a seat with nine others to represent India for trap shooting in the forthcoming 2016 Olympics to be held in Rio de Janeiro. Understandably, the entire family is elated. Father Darius, a national level shooter had introduced the sport to his son when the latter was just 10 years old. The bright Indian shooting star Kynan has been national junior champ for six consecutive times.
Trap shooting is an expensive sport that needs sponsors. “I am sponsored by the arms company Berretta.  I am also supported by Olympic Gold Quest and funded by the Indian Government,” Kynan informs us.
Sourcing guns, ammunition and equipment in India is replete with hurdles. “Getting an arms license in India is very tough. Ploughing through the system is impossible. However, that said, the government has realized the worth of the sport and has invested in shooting ranges with equipment across the country where budding sportsmen can go and hire equipment and start,” Kynan affirms.
Born in Hyderabad on January 29, 1991, Kynan used to accompany his dad on camping and fishing trips, to shooting ranges and for international coaching too. The father and son bond over their love for travelling and passion for shooting, fishing and fast cars.
“As a kid, shooting is always interesting and especially seeing targets explode when one connects is quite exciting. Watching my dad shoot made me want to follow in his footsteps,” Kynan says.
Darius manages, coaches and guides him while mother Dinaz looks after his public relations, mental training and health aspects. Grandmothers Khoty Chenai and Nanki Parakh are also extremely encouraging and proud of his achievements.
Kynan spends long hours training and he listed out his extremely disciplined daily schedule on a typical training day: “Wake up 7.30 hours/Breakfast of oats and fruit/On the range at 9 a.m. /Shoot till 2 p.m./Lunch of chicken or tuna and veggies/Back on the range at 3 p.m./Shoot till 6 p.m./6.30 to 8.30 p.m. exercise/Then dinner and bed.”
Having done his A levels from Hebron school, Ootacamund, the athlete has a diploma in business management and sports management from Brunel university in London, UK. The hobbies that  help him relax in his spare time are working out, CrossFitness training, watching movies, reading and listening to music.
Asked which other profession would he have liked to take up if he was not a shooter, Kynan responds, “A career in sport, physical training or nutrition.” 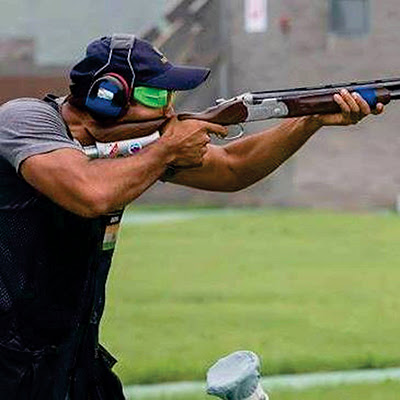 Though he travels much of the time, Kynan does not mind. “At my age there are no wife and children, no other responsibilities. I just have to travel and shoot.” Does he ever gets homesick and miss his family and friends? He answers wryly, “Sometimes I do.” But he stays in touch with friends in Hyderabad through social networking sites.
Among Indian shooters Kynan admires Manavjeet Singh Sandhu who he says “is India’s number one and his scores are inspirational to me.” The international shooters that Kynan looks up to are Giovanni Pellielo from Italy and Michael Diamond from Australia. “They have been the power houses of trap shooting for my generation.”
Shooting is a fiercely competitive sport but bonhomie does exist. “When I am on the circuit I tend to speak to everyone, but when it comes to competition, shooters go into what they call their ‘zone’ and each one handles that in a different way; some laugh and joke and others are closed. I would say I am somewhere in the middle of those two extremes and I like to think that I have a happy mixture of the two sides.”
In a sport where a single point can make a difference to ranking, and with the highs of winning and the lows of losing, Kynan explains how he manages to strike a balance and cope. “That’s something every sportsman has to deal with. For me, personally, I get upset for a few days if I lose and then get over it, shake it off and jump straight back into training for the next competition. Because there is always some other big competition to look forward to, that’s the beauty of sport.”
Recent competitions he took part and fared well in were the world championship in Italy, the Asian Clay that took place in Iran, the Asian championship in Kuwait and the Indian national championship in Delhi all of which helped Chenai confirm his 2016 Olympic berth.
Kynan is also a trained life-guard and a school level swimming champ. A few years ago while camping with his father in Panchmeshwar, Uttarakhand, near the border between India and Nepal, he saved the lives of some picnickers who were in distress after trying to swim in the River Sarayu. He quickly jumped into the fast-flowing muddy waters to grab a person who had entered the river without knowing how to swim. Darius helped Kynan fish the unconscious person out of the river and the latter’s mouth-to-mouth resuscitation luckily revived the man.
Being a Zoroastrian means a lot to Kynan. “On my navjote, I requested my mother to make a placard saying ‘PROUD TO BE A ZOROASTRIAN’ which I placed on my car along with the flowers and balloon decoration,” he recalls.