The second day of the first ever Iranshah Udvada Utsav started with two fun filled participatory activities. The Heritage Walks and The Treasure Hunt had droves of people walking or running through the small lanes of Udvada and give the town the kind of buzz and foot activities seen only once or twice a year during the Iranshah Salgrehs.

Groups of attendees were escorted by architects well versed in Udvada’s history and shown around the various different historical and heritage landmarks. 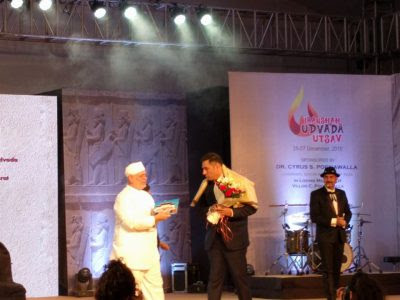 The treasure hunt had 38 teams of 5 people each race around the town taking selfies at landmarks, checking off items off their list of to-do’s and hunting for quirky clues and souvenirs. Teams comprised of people of all ages and the hustle bustle it created was very infectious.

The Iranshah itself was abuzz with devotees filing to worship in a steady stream all day.

The formal lectures and events in the main Gymkhana grounds started in the morning. A series of lectures and audio visual presentations were interspersed with some entertainment breaks. 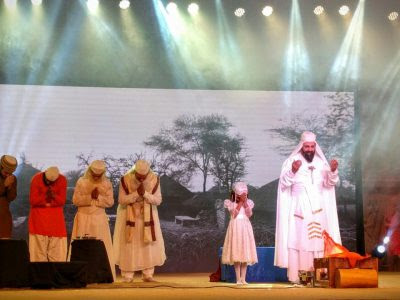 Notable among the speakers were BPP Trustee and community leader Noshir Dadrewala who spoke about Ancient Iran. His mastery and command of the topic and the lucid presentation brought alive some of the glories of the “MadreVatan” as we refer to Iran today. It made my resolve to visit Iran so much more stronger in the near future. 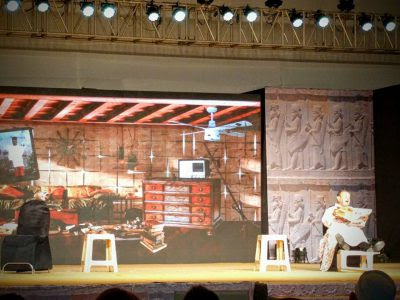 Aapro own Ganesha says…..aka Bejan Daruwalla took to the stage and in his customary manner enthralled the crowd. He also predicted that 2017 is the year when the world will see peace return. Let’s hope for all our sake that his prediction is right.

Firoz Andhyarujina whom I had the chance to hear for the very first time spoke exceedingly well on the role of the Zoroastrian Youth in modern times. Hopefully we will see a recording of his talk online soon.

Dr. Shernaz Cama and the Jiyo Parsi team spoke about the program and presented a video showing the work done by their campaign. More power to them and Babies to our community.

Former Maharashtra Attorney-General Darius Khambata spoke about Zoroastrians and Zoroastrianism today. In his excellent oratory he laid out his case and asked the leaders, priests and community in general to re-think the whole concept of keeping our Agiaries out of bounds to women who marry outside the faith. Darius’ talk was similar to the one he delivered two years ago at the 10th World Zoroastrian Congress in Mumbai in 2013.

And towards the end of his talk one witnessed the only instance of boorish and uncouth behavior from the crowd. Godafrid Aresh who was sitting in the VIP enclosure got up and started shouting at Darius as he finished his talk and made his way off the stage. Mahyar Dastoor the MC requested her to take her seat but she kept on at it shouting and making a scene. She was further egged on by a section of the crowd that booed the speaker and cheered her.

Having a different opinion from the speaker is one thing. However to actually get up and disrupt proceedings is extreme. It took a lot of restraint from the other suave Mahyar Dastoor to ignore her. However the Vada Dasturji had to finally step in and ask her to take her seat. It was the only time one saw Vada Dasturji ruffled up. And rightly so. There is a time and a place and a forum and a method to vent your disagreement. One may not necessarily agree with everything that Darius said, but everyone has a right to their opinion. This disruption of events in front of local and national media was unfortunate and does not show the community in good light.

Stand up comic Neville Bharucha followed this incident and helped cool down the air.

The evening entertainment that day started with the felicitation and welcome of aapro Boman Irani. The amazing actor enthralled the crowd with his presence, and spoke of his immense pride in being a Parsi and a Zarathushti.

The evening entertainment was packed with skits by young children …the Farohars of New Delhi. The girls of Avabai Petit Girls High School sang monajats and the MEJMT Trust performed a fantastic theatrical experience called Tapo Re Iranshah.

A live band brought the evening to an end with Boman Irani jumping in and belting out a couple of songs and strumming the guitar.

The day ended with a sit down dinner.

The third and final day began on Sunday December 27th with a sense of expectation and euphoria to welcome Ratan Tata, Arun Jaitley and Cyrus Poonawalla. 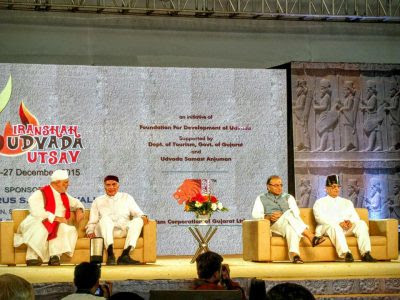 Decked out in Daglis and Gara Sarees thousands of folks filled up the Gymkhana grounds and waited patiently for all the dignitaries to arrive.

Finally the three of the made a quick entry. The level of applause reserved for Ratan Tata was ear deafening.

Boman Irani introduced all the three dignitaries before each one of them addressed the crowd. Finance Minister Jaitley spoke of his connections to Parsis from childhood and urged more Parsi businesses and entrepreneurship to happen besides increasing the population.

Ratan Tata spoke about the pride he had in being Parsi and Zarathushti and was totally humbled by the love and admiration the community gave him.

Cyrus Poonawalla spoke of the love and religious fervour his late wife Villoo had for the Iranshah and in who’s memory he had sponsored this Utsav.

All the three dignitaries were also felicitated by the local officials of the town, district and state.

After Jaitley left, other Parsi organizations presented mementos to Ratan Tata and Cyrus Poonawalla. However the organizers were caught totally unawares by the enthusiasm of those who wanted to felicitate the two and the media personalities who were fighting over each other to capture the imagery. That last part showed a certain lack experience on the part of the organizers. Vada Dasturji was seen on stage valiantly requesting some sense of order to no effect. 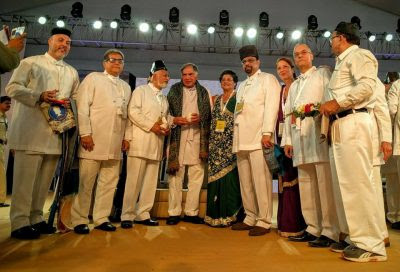 The first ever IUU 2015 was successful overall. And it was great to see Vada Dasturji Khurshed Dastoor announce the next one shall be held from December 23–25 2017. Mark your calendars.

The program had a good balance however the sessions were too long. They needed some breaks in the middle.

Evening entertainment on both days was very long. Of course this is a good problem of plenty. But maybe cutting down the choreographed dance items to just one or two would make the entertainment evenings more cohesive.

The capability of the caterer to serve meals with efficiency needs to be revisited. There was lack of manpower in serving such large numbers of people and the organizers should look into streamlining this in the future.

What’s with the fascination of kitsch Persepolis imagery as the backdrop to every big Zoroastrian event in India ? The 10th WZC in 2013 saw it, and the same thing was repeated here. Taking random imagery and pasting it as the backdrop and side wings, shows a lack of creative set design. Let’s have some better artwork that’s more pertinent to the nearly 14 centuries of stay in India and not hark back to the ruins of Persia at all times.

The location of the stalls and vendors was totally wrong. They should have been positioned such that people walking into and out of the auditorium would see them. Tucking them at the very end of the grounds, made it look as an afterthought and the interaction with the crowd was not as effective as it should have been.

Audio visuals are very powerful. However their actual content is very difficult to get right. While the Sands of Time video was great, the other one with a voice over of an English accented girl and video imagery showing white anglo-saxon people does not do any god, even if you stick a Zarathushtra image at the end of it to make it legitimately “Zoroastrian”

The volunteers who did yoemen service over three days need a standing ovation. Scouts, Rovers and Guides from the 32nd West Bombay Pioneer Scouts and the 16th East Bombay Scout Group and their Guide Company volunteered their time from 7 in the morning to 2 AM everyday controlling crowds, dealing with boorish devotees at the Iranshah and disgruntled participants who would vent their frustrations on the volunteers. Thank you and more power to each of these volunteers.

The next Utsav should also include more of imparting religious knowledge. Specifically to focussed age groups. This is after all the Iranshah.

All in all, those who attended will always remember the first IUU. The Vada Dasturji Khurshed Dastoor, his wife Havovi, Homai Engineer, Dinshaw Tamboly and others did a fantastic job of pulling off such a mega event. This experience of an event at this scale will be stepping stones to even more better and greater success in the years to come. And may the Pak Iranshah continue to burn bright as the beacon of Zarathushti religion for millenia to come.

I would like to end with one profound statement that Boman Irani said in his thank you speech on the evening of the second day when he was felicitated. That for me was the singular take away from this event and something that will always remain in my mind. He said and I paraphrase from memory…. We Parsis should stop saying how great we were and are. It is only when others tell us the same, that it becomes even more meaningful and powerful. That my fellow Zarathushtis should be what we all collectively strive for in 2016.