Welcoming the New Year with The Bay Area’s Zoroastrian Community 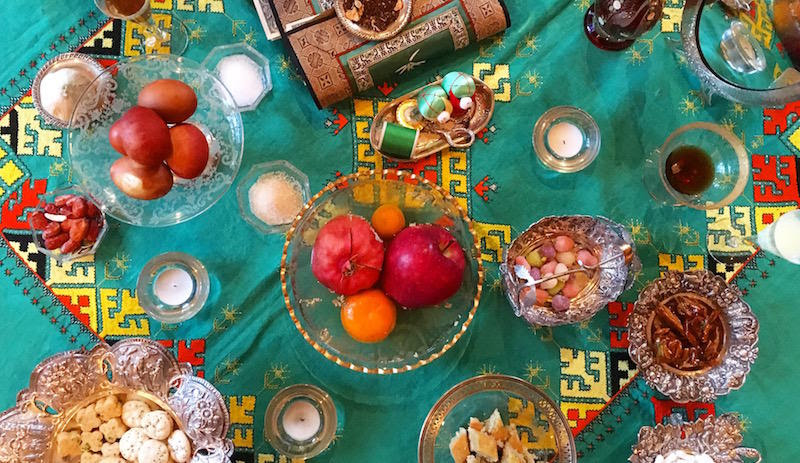 Zoroastrianism is a monotheistic faith that began in ancient Iran over 3,000 years ago. The Bay Area happens to be a hub for the Zoroastrian community, whose global population has dwindled to just over 100,000. With Nowruz (Persian New Year) celebrations winding down, KALW’s Asal Ehsanipour set out to explore her roots by learning more about modern-day Zoroastrians in the Bay Area.

It’s the first day of spring, and I’m welcomed by the smell of fresh herbs as I walk through the door of my aunt and uncle’s home. My entire family is scattered around the house, and orange tulips bloom everywhere.

We’re here to celebrate the Persian New Year, Nowruz, which translates to ”New Day.” We feast together on Persian foods, such as herbed rice and fish, as my cousin gives her niece new money, a customary gift.

The customs of Nowruz are shared by people of all faiths in Iran and its diaspora — Muslims, Jews, Christians, Baha’is. But its rituals actually come from Zoroastrianism, a monotheistic faith that began in ancient Iran over 3,000 years ago.

It was the dominant religion during three Persian empires, and remains one of the oldest religions in the world. 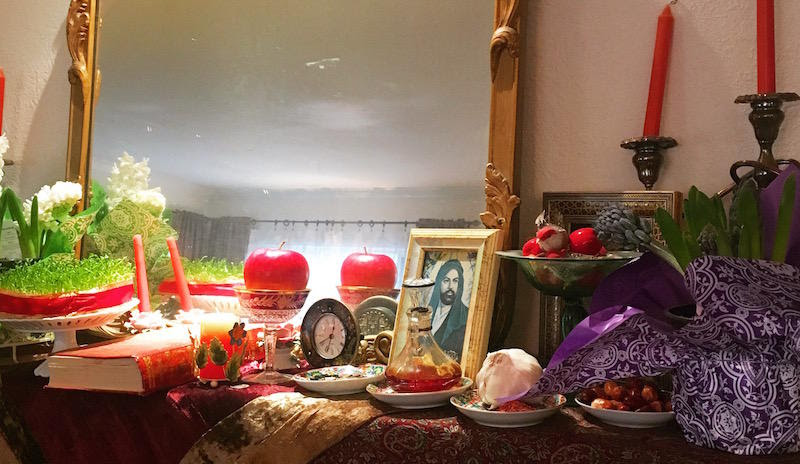 A close up of Nazneen’s haftseen table, which means “seven sins” or “s” in Farsi.
Credit Asal Ehsanipour

Zoroastrians by the Bay

The day after Nowruz, I find myself in Palo Alto, washing my face with rosewater as I arrive at the home of Niloo Farhad.

“I was born and raised in Iran,” says Niloo. “I am Zoroastrian by birth.”

Now, Niloo does not consider herself a very observant Zoroastrian, but she believes in the spirit of Nowruz: What you do on the new year carries you through the rest of the year.

“That’s where the Zoroastrian part at least for me comes,” she says. “You think well, you speak well, you behave well.”

Like many Iranians, Niloo follows certain traditions every year, including creating the customary altar, called a haftseen table. The word means “Seven S’s,” and each of the items on the table starts with a “ssss” sound.

“Vinegar,” she says. “It symbolizes age and maturity.”

The haftseen table reflects wishes for the year to come, with roots stemming back to the number 7 and the Zoroastrian creation story. However, the table isn’t a mandated practice; people of all religions include books of worship, such as the Torah, Bible, or Koran. Some Iranians even include Sufi poetry as a symbol of their ideology. Niloo says that inclusivity is what Nowruz, or Persian New Year, is all about.

“I think that’s why it’s survived so long,” says Niloo. “Because it is not tied to one religion.”

Persian kings such as Darius popularized the holiday, which created a tradition of celebration across modern-day Afghanistan, Turkey, and, of course, Iran. 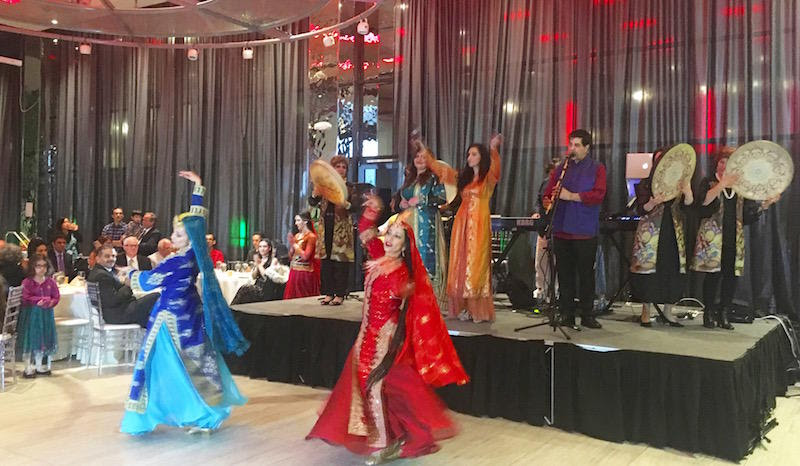 Each year, the Persian Zoroastrian Organization hosts a Nowurz party to ring in the new year.
Traditional Iranian dancers and musicians entertain the hundreds of Bay Area Zoroastrians
who attended.
Credit Asal Ehsanipour

Today, Nowruz is regarded as both religious and secular. Religious in that Zoroastrians are expected to clean their houses and go to the fire temple. However, it’s secular in that even the non-observant gather with family for celebratory meals.

Every year at the beginning of spring, hundreds of local Zoroastrians gather in San Jose, where the Persian Zoroastrian Organization hosts a party in honor of the new year.

Khashayar Anoosheh, or Kashi for short, moved to the Bay Area in the early ‘80s, back when there were just a handful of Zoroastrians here. As the community’s grown, he’s tried to preserve its teachings, like thoughtfulness.

“The core thing,” says Kashi, “is education and progress, and understanding of your surroundings.”

Some call Zoroastrianism more of a philosophy than a religion. It’s reflective and there’s no official day of worship. Therein lies an obstacle to preserving the culture.

Kashi says that on the one hand, it’s good to have progressive thinkers who make independent choices.

“But from the perspective of trying to get the community mobilized to do something, no,” he says. “That one it gets tougher. Because everybody’s going to have their own ideas.”

Each year, the Persian Zoroastrian Organization hosts a Nowurz party to ring in the new year. Traditional Iranian dancers and musicians entertain the hundreds of Bay Area Zoroastrians who attended.

At the party, I watch people greet each other with a kiss on each cheek, before the kids lead a prayer to ring in the new year. Traditional Iranian music starts. And then, a little girl approaches the dance floor, absorbed in Persian dance.

The party is set to go on like this until midnight.

But while the Persian Zoroastrians were celebrating Saturday night, the Parsis were having a Nowruz party of their own.

Now, the Parsis also practice Zoroastrianism, but come from India and Pakistan, where they settled after leaving Iran sometime between the 7th and 10th centuries.

“The Iranians like to have music and dancing,” says Nazneen Splietd, who was born in Karachi, Pakistan. “And the Parsis are more interested in their food.”

Nazneen Spliedt, former president of the Zarthoshti Anjuman of Northern California, with her haftseen table at her South San Francisco home. Nazneen is Parsi, and only began making haftseen tables of her own when she met the Iranian Zoroastrians of North America. 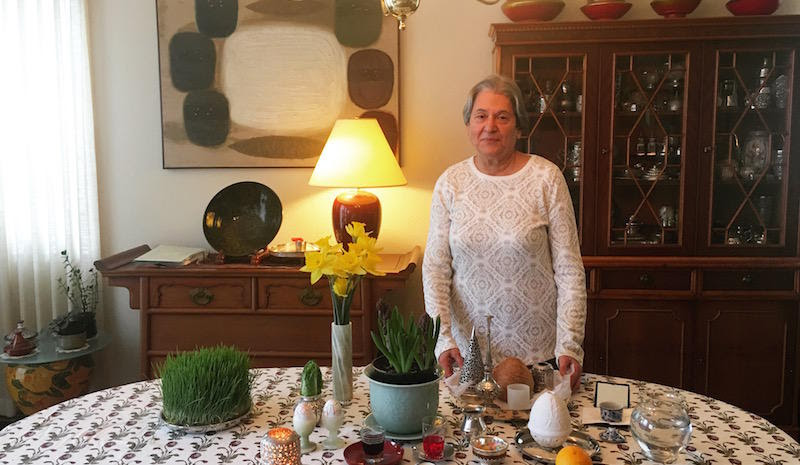 Nazneen is the former president of Zarthoshti Anjuman of Northern California, the Parsi organization here in the Bay.

“Parsi,” literally means “From Persia” in Gujarati, a language native to the Indian subcontinent. But with a recent migration to North America, Iranian Zoroastrians and Parsis have come together for the first time in over a thousand years.

“They were different and yet they were alike,” says Nazneen. 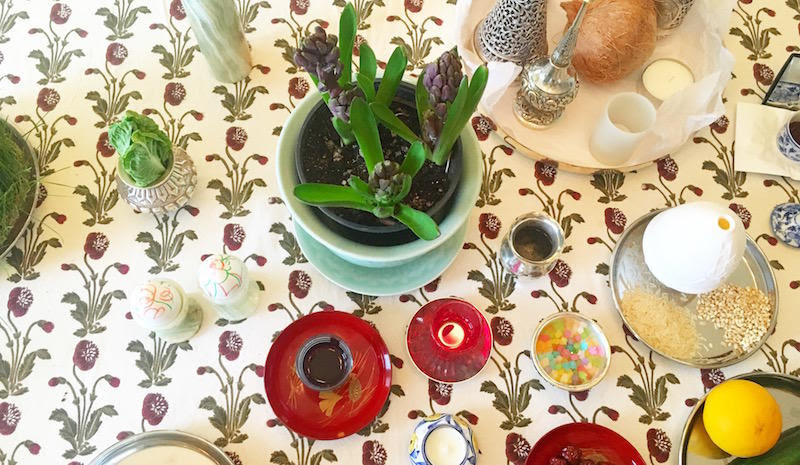 A close up of Nazneen’s haftseen table, which means “seven sins” or “s” in Farsi.
Credit Asal Ehsanipour

“Then when we go back to see a little bit of the culture, we see we always used to eat this dish, but now we can see the [original] did come from Iran,” she says.

Nazneen says the convergence of communities here in North America allows the next generation of Zoroastrians to come together. They even share a Zoroastrian temple in San Jose, one of only eight across all of North America.

So while different languages once divided them, English can bridge that divide. Since the Zoroastrian community is so small, so scattered, this reunion feels even more important.

“Now of course everyone is worried that the population is dying and dwindling,” says Nazneen. “But all these tales are maybe just overblown.”

The Zoroastrian population is shrinking, with a little over 100,000 globally, according the Federation of Zoroastrian Associations of North America.

However, the Bay Area numbers have grown — especially in job-rich Silicon Valley.

Jamshid Varza noticed this growth back in 1996, but found there wasn’t a single place his kids could learn about their Zoroastrian heritage.

He says it started one morning when he was at breakfast talking with his wife Mitra.

“The kids would go to school and see their friends go to church, go to synagogues, and ‘say what are we?’” says Mitra. “And they had no idea.”

So Jamshid and Mitra started a Zoroastrian school.

Turns out, students loved it. And eventually, it brought Zoroastrians of all ages together.

“Parents. Grandparents. Extended family. People coming from overseas,” says Jamshid. “Because they wanted to be together.”

The Zoroastrian classes still exist, but not under the Varzas.

Since then, Jamshid’s been producing documentaries on Zoroastrianism. He also helped start Stanford’s Zoroastrian lecture series, which became a department that lasted six years before the professor who led it transferred to Oxford.

Jamshid and Mitra say these efforts have given the next generation a feeling of belonging.

Mitra says education does more than bring Zoroastrian kids back to their roots. Traditions like Nowruz inspire regrowth. It’s the celebration of life. Of what sustains us.

Magical for everyone. After all, the beauty of Nowruz is that it extends to people of all faiths, whether you’re Zoroastrian or not.