Jiyo Parsi- the Government of India’s scheme implemented by Parzor, has expanded in 5 years from a medical programme financially assisting couples who require ART, to a programme dealing with the care of elders and children, with financial assistance as well as Counselling, to ensure the Health of the Community.

At an exclusive event on 6 July at the Banaji Atash Behram Hall, Charni Road Mumbai eminent psychiatrist Dr. Pervin Dadachanji, Chief Guest, addressed the audience on the topic : ‘Yes, We Can: Marriage Myths and Reality.’

Dr Dadachanji, renowned Consultant Psychiatrist, has many decades of experience in the field of Counselling young adults and her speech was greatly appreciated.

Taking Jiyo Parsi’s attempts at Parsi matrimony further, Parzor planned an evening for the launch of a Parsi Shaadi App. This particular app is created by one of India’s leading matrimonial services Shaadi.com. They had assigned Mr Pamit Anand, VP & Business – Head, People Interactive India, Private Ltd, to launch the App at this event.

Helping Parsis Meet their Partners, is on the checklist of Jiyo Parsi. A dedicated App can empower singles, allow them to choose independently and when single-mindedly dedicated towards the Parsi Zoroastrian community, will help young adults find a suitable partner.

This app launch was followed by an interactive panel discussion entitled ‘A Wholesome Work Life Balance.’

Eminent Chairman of the Madison World Group, Mr Sam Balsara, who has been closely involved with the Jiyo Parsi initiative and prepared all the Ad Campaigns pro-bono through Madison BMB, showed his excellent understanding of the issues facing his community. Dr Anahita Pandole, Consultant Gynaecologist, spear heading the medical component of the scheme shared her experiences, while Mr Jimmy Mistry, Chairman & Managing Director, Della Group showed how to manage life, family and business successes simultaneously. While Dr Dadachanji added to the issues raised by her in her speech, the young Editor of Grazia India, Ms Mehernaaz Dhondy exemplified the ability for Parsi women to reach the heights of a professional career, alongside raising happy children.

The Panel then took questions from the audience and Press. The event concluded with Parsi refreshments enjoyed by all.

Follow these steps to avail of the 3 Jiyo Parsi Care Facilities The objective of the Jiyo Parsi Care Scheme is to encourage couples to have more children and in turn increase the Parsi Population.
Scheme 1: Crèche and Child Care Support – Support to families up to maximum 24000 per month, per child – Available till the child is 8 years old – Payment is for crèche or child care giver expenses
Scheme 2: Senior Citizen Honorarium for Child Care – A capable senior citizen can care for community children – She/ He will get Z3000 as honorarium per child – Applicable up to the child is 10 years old
Scheme 3: Support to couples to help look after Elderly Dependents staying with them – 24000 per month per elder (60 years and above) residing with the couple – Available to couples whose income is below 10 lakhs p.a. – Main aim is to help the couple to either start a family or increase their number of children
Availability of Application Forms Download forms from website www.jiyoparsi.org or the Jiyo Parsi page on Facebook
Fill out all the details and courier the form to: Dr. Katy Y. Gandevia, Jiyo Parsi Programme, Tata Institute of Social Sciences, Sion Trombay Road, Opp. Deonar Bus Depot., Deonar, Mumbai 400 088 (Mobile) 9819140820
JIYO PARSI

The dwindling population of Parsi community nationwide has long been a cause of concern and was the primary motivation for the Jiyo Parsi scheme.

Funded by the Ministry of Minority Affairs, and conceived and promoted by Parzor Foundation of the Bombay Parsi Punchayet, the Tata Institute of Social Sciences and the federation of Zoroastrian Anjumans of India, its primary aim was to aid Parsi couples facing difficulties in conceiving with IVF treatment. After a sluggish start, it has finally gained ground in Gujarat, where as opposed to just one birth two years ago, the number has now risen to around 12.

In the past four years, a total of 168 babies across the country have been born under the Jiyo Parsi scheme, considered to be an achievement by the team working on this programme. Unfortunately, Ahmedabad has only had one baby till date. “Infertility is still a taboo in Ahmedabad. Also, most Parsis are quite well off to approach us seeking financial and medical help.”

“However, the response from Surat and Navsari has been quite good. We are also trying to reach out to gynaecologists across the state, requesting them to direct Parsi couples visiting them, to us so that we can help them,” says Pearl Mistry, counsellor, Jiyo Parsi in Gujarat.

At present, the Jiyo Parsi programme is in the second phase that aims at getting Parsi men and women to rapidly marry and procreate in significant numbers. Last week, a Parsi matrimony meet was held in Ahmedabad, in which nearly 90 Parsis participated.

Under the scheme, a couples opting for IVF get reimbursement of nearly 8 lakh, covering expenses till the child is born. However, the biggest challenge is to counsel the couple as distraught couple lose patience as IVF can take multiple cycles. “Even as we encourage couples to opt for a second baby, we offer them Rs 4,000 per month for it to help cover cost of crèche for the first eight years.”

“The scheme is aimed at increasing the shrinking population and does not see a good response as most Parsi couples do not aim to have children. It is important to overcome the mindset and make them see reason. Only then there will be a change and they will go for early marriage and early kids,” says Rashna Daruwalla, manager, admissions, Anant National University, adding, “For every 200 new born, there are 800 dead. These figures are equally responsible for the decline.”

Navroze Mubarak- A Gift for the Community

We are happy to announce a Navroze Gift for the community from the Government. Jiyo Parsi would like to make you all know about the new features of the Second Phase Jiyo Parsi and request you to circulate the same to your Anjumans before Navroz. Taking into account the problems facing young couples and families the Ministry of Minority Affairs has kindly agreed to help us even more financially.  While we are grateful that now the Medical reimbursement has increased and delivery charges are included in the medical package we also have support for :
I. Creche and Child Care

This will ensure all financial support to help increase our community numbers in the New Year.

We are enclosing Flyers wish a request that you send soft copies to your mailing list as well as print in colour and put than up at Agiaries, Anjumans and Baugh Notice Boards.

For your convenience, we are also enclosing the Forms as mentioned below in Gujarati and English: (please click on each link to download them)

English- Support for Elderly Dependants Living with a Family

Gujarati- Support for Elderly Dependants Living with a Family

These have been uploaded on our websites and will be also circulated on Social Media. A WhatsApp attachment is being sent in this mail so that the Navroz Gift to the community information goes viral.

Please download this onto your Anjuman Groups and circulate widely. Since the Health of the Community Component calls for a great deal of monitoring and liaison with the community. the Jiyo Mobed component will be handled now by the Athornan Mandal of the priesthood with the WZO Trust Funds Mobed Scheme. However, Jiyo Parsi will continue to share information with the priests about the new Schema under Jiyo Parsi- 2 at these Workshops.

Please note that as the three new components are a Pilot Scheme, it will he for a limited number of 100 applicants each and on a first come first serve basis. Therefore kindly urge your community members to apply as soon as possible.

Navroze Mubarak and best wishes to you all,

Over 130 babies born in 4 years of ‘Jiyo Parsi’ scheme

Over 130 babies were born since the government launched the ‘Jiyo Parsi’ scheme in 2013 to address the Parsi community’s declining population, says a foundation associated with implementation of the initiative.
The Parzor Foundation is implementing the scheme, launched by the then UPAgovernment, along with the Union minority affairs ministry.

The average of Parsi children born annually over the last two decades was around 200, according to Shernaz Cama, director of Parzor, a project that aims to reverse the downward trend with the government’s help.

“In such a backdrop, if you compare the number of children born in the last three years (131) under the scheme, then it is a proportionately a good number,” Cama told PTI.

She attributed the sharp decline in the birth rate in the community — located mainly in Maharashtra’s Mumbai and parts of Gujarat — to socio-psychological reasons.

These include Parsis having late or non-marriages, its members marrying with people outside the community and also many couples not willing to have babies.

Demographically speaking, 31 per cent of the Parsis are aged above 60 years and 30 per cent are unmarried.

“Parsi women are very highly educated. They do not wish to marry till they finish their education. So, there are late marriages. Once a couple has a late marriage, their fertility automatically goes down (biologically),” Cama said.

The total fertility rate (TFR) of the community is 0.8, that is, a Parsi woman in her total child bearing age has less than one child on an average.

To counter the situation, the ministry and the foundation have adopted a multi-prong approach of advocacy (counselling), medical and financial assistance to couples seeking help under the scheme.

“We are advocating and counselling people to get married at the right age. We are even pushing couples to have a second child, for that is important from the point of view of health of their family.

“Our counsellors are available 24×7. They have been de- stressing people whenever they are under stress,” Cama said.

Under the programme, the ministry has been providing assistance to families seeking help for treatment.

According to the second phase of the scheme, a Parsi family having an annual income of Rs 15 lakh and below will get 100 per cent assistance from the government.

This video is all about producing effective parents. The speaker mostly speaks about certain things to be considered during Parenting – Hiral Shah 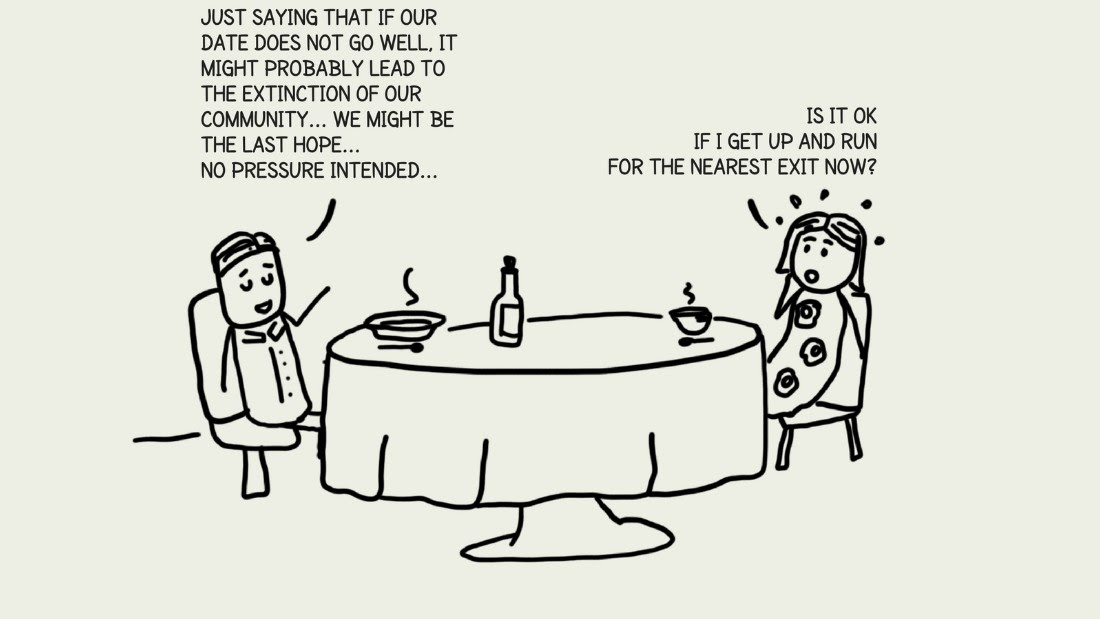 While India’s overall population continues to increase rapidly, the country’s Parsi community faces a population problem of a different kind: It’s decreasing rapidly. Originally followers of Zoroastrianism who settled in India in the 8th century, the number of Parsis in India has halved in the last 60 years and now stands at approximately 57,000. The “Jiyo Parsi” scheme initiated by the government to tackle the issue, encourages the Parsis to go forth and multiply with cheeky taglines like “I’d rather have a dog than a baby. But the really cool ones have both.” It seem to be working as the 102nd Parsi baby was born since the initiative was launched in 2013.
http://edition.cnn.com/2017/08/02/opinions/arpan-roy-india-week-3/index.html
« Older Entries